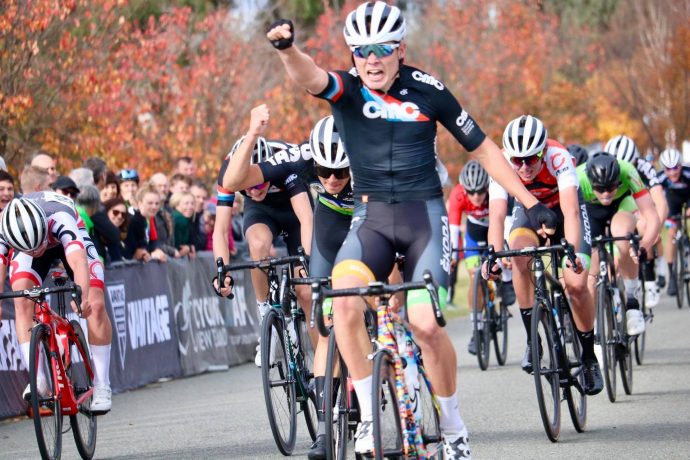 Lachie Dickson (above) won the mens U19 road title on the final day at the New Zealand road nationals capping a really successful weekend by our riders down in Timaru.  It was great to witness this win in what was a very competitive U19 mens race.  2019 couldn’t have gotten off to a better start for Lachie after a strong track nationals and being named in the junior worlds squad too so a big few months ahead for him.

We had Prue Fowler flying the flag down in Timaru too.  Prue really showed her class in both the time trial and road race.  She won the U17 girls time trial on day one in a really impressive ride. What topped this race for me was the amazing show of strength in the road race where she won solo by 2mins.  You don’t often see U17 riders winning solo but to win the way she did shows Prue will be a force to be reckoned with in the coming years. I was super impressed with how she rode the race on what was a very tough course. Prue rode with real guts and backed herself by attacking early and was rewarded with a nice solo win.  To make it even more impressive she repeated her feats from a year ago after winning both National titles as a first year U17 – don’t know if anyone has ever done that.

Penny Pawson had a great nationals.  Penny won the 24k time trial really putting in a dominate effort to win by 40s in a race we targeted.  In the road race she finished a close second behind a very strong Katie Richards.  Although a bit disappointed to not win the road race, the TT was impressive and it was great to see a rider who puts so much into the finer details of training get rewarded with the win.

In the U17 boys road race we had a great result with Ryan Macleod finishing 2ndcoming agonisingly close to the win.  Ryan got pipped by a tire with the win going to Charlie Tattersfield in a sprint finish.  Super impressive ride by Ryan showing the improvement he has made over the last year and the way he attacked the race was great to see.   Young Jonathan Fish was in the same winning move as Ryan in the closing stages of the race only to get pipped on the line to finish 5th.  Being a first year U17 this was a great result for Jonathan and I’m looking forward to seeing him progress this coming year.

Henrietta Christie finished third in the U19 girls time trial and a 5th in the road race.  Henrietta is a first year U19 so to be right up there with our best is impressive and bodes well for the future.  We really targeted the time trial this year and was only 16s off winning so it was a great TT by Henrietta and ever so close to a national title.

Emma Smith had a really great nationals in the U23 grade.  She finished 3rd in the time trial and 2nd in the road race. Emma is now in Europe racing with Mike Greer Homes team, which is a great opportunity for her to develop further.

A big stand out for me this year was Logan Currie.  He won the U19 mens TT by 1min over some very classy bike riders.  There was 9 corners in the TT and I wouldn’t say it was pan flat but Logan still averaged an impressive 46km/hr.  To be fair though he is about 2 foot off the ground so he’s very aero but that ride was probably one of the most impressive I’ve seen in a long time.  The Currie name is pretty strong in endurance sport with his cousin Braden dominating ironman and coast to coast events so I guess it was only a matter of time before Logan did what he did.  Big future with this kid I reckon and huge congrats to him.

So it was a really good weekend for our riders and coaches down south with some top results, also some great learning for those that missed out on the medals. At the end of the day it doesn’t always go well but every race teaches you something no matter if you win or not.  Big thanks from me personally to Hamish who took great videos of the courses that we circulated to our riders prior to the event.  It makes a big difference as a rider being able to visualise the course beforehand and see what’s in store.

That’s it for a bit now before the schools cycling season ramps up.  I’m actually just back from a two week UCI coaching course up in Cambridge and in a few weeks I am off to America and Canada for a stint of coaching so it’s a busy time for me.